Aerial is a macOS screensaver that lets you play videos from Apple's tvOS screensaver. This includes classic Aerial videos shot over various cities and locations (New York, San Francisco, China...), Earth videos from the ISS, and the new underwater videos introduced in tvOS 13. Starting with version 2.0, Aerial also includes videos from 3rd parties that kindly shared them, and you can also now add your own!

Aerial is completely free and open source. You can follow its development here on GitHub, and even participate if you want. You don't have to be a developer, we always need help when it comes to translations in various languages, check here for more information (it's easy !). 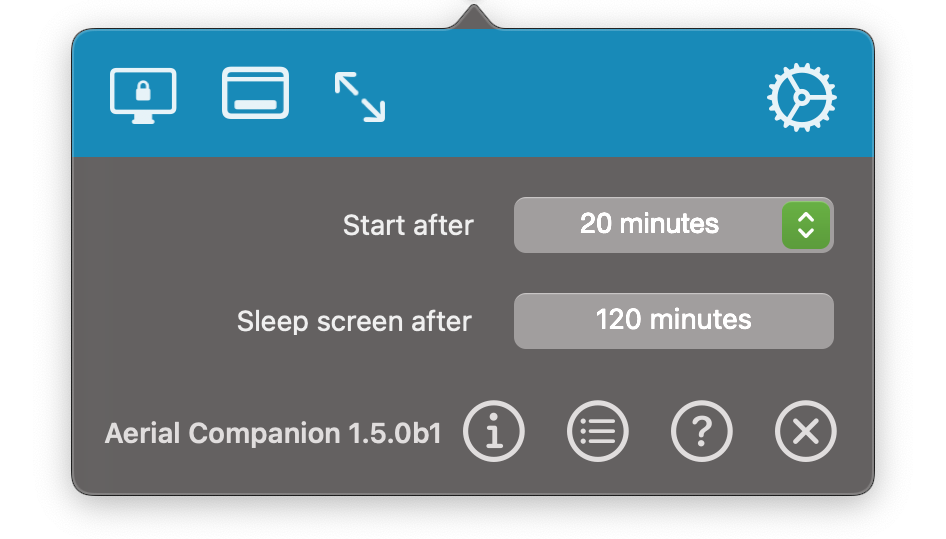 Version 3.2.0 now offers support for macOS Ventura and its new System Settings. Adventurous users may also want to try the beta version of Aerial Companion that includes a redesigned user interface and needed fixes for Ventura. It can be downloaded here.


Also, Josh & Hal released a pack of 31 videos shot over the Ventura region in California. You can see a preview below :


You can get their video pack on their website or check a list of all available videos here.

Robin Fourcade has kindly shared new videos for everyone to enjoy. He's taking us on a trip around Europe with some breathtaking views shot in Norway and in France around the Mont Blanc. Check out a preview below :

To add those videos to Aerial, go check the instructions at the top of the page here. With massive thanks to Robin for sharing those (and for his incredible patience !).


Now in beta : a much improved Companion

Aerial Companion (the app that auto-updates the screensaver) is getting a much needed makeover with a new UI. This is still in beta and the design will likely change a bit, but the goal is to make some more room to add new features. 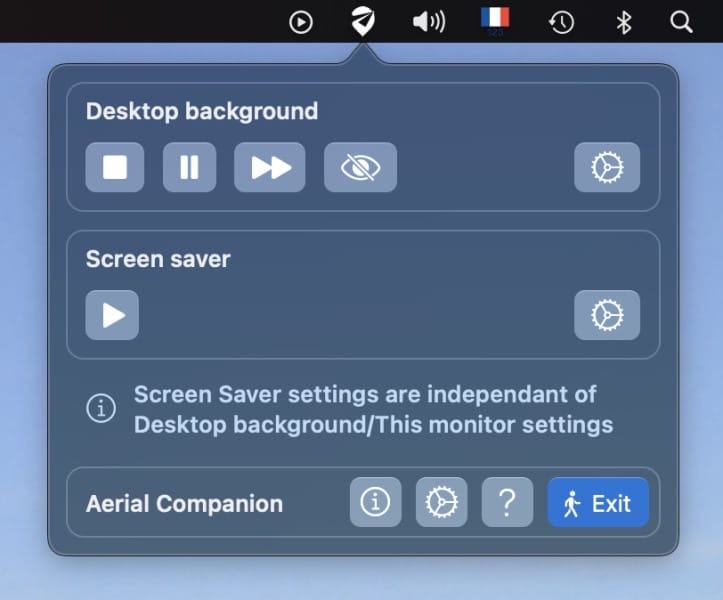 A big improvement is adding controls to what used to be fairly hidden under an experimental menu : the ability to run Aerial as your Wallpaper! And now, you can control it from Companion. On top of being able to Stop and Restart the wallpaper, you can also pause it, skip a video, or even skip and hide the video, right from the UI.

And you have to admit... it's really cool! 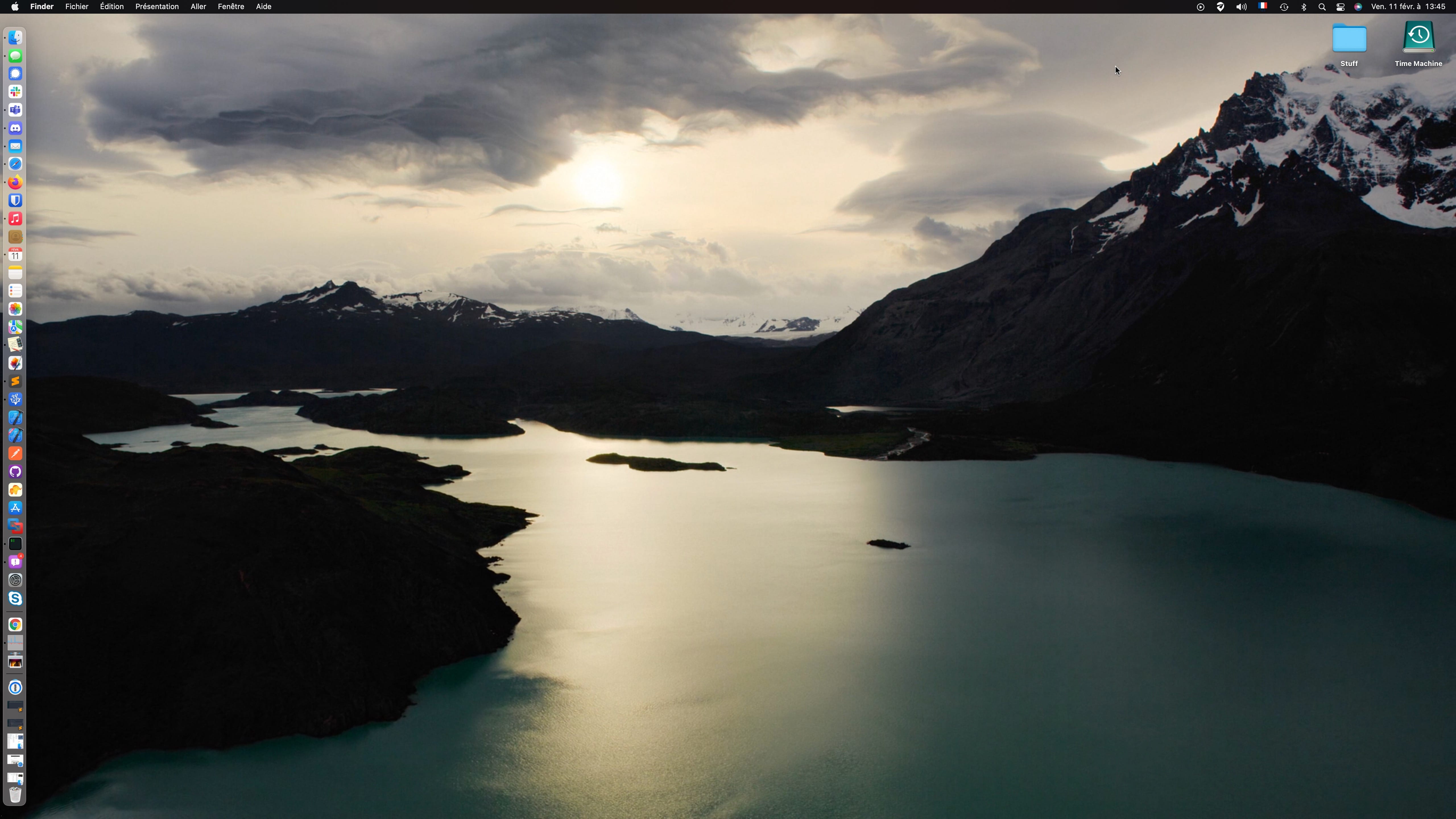 More improvements are coming soon, perhaps more important on the list are speed controls. If you want to check it out right now, you can install the latest beta from here (make sure you quit the old version of Companion if it's running in your menu bar before overwriting with the new one) : Aerial Companion 1.4beta1. You can also check the release notes.

The latest videos from tvOS 15 are now available in Aerial 3.0, including videos from Patagonia, Grand Canyon, Scotland and Iceland.

A simplified yet more powerful UI 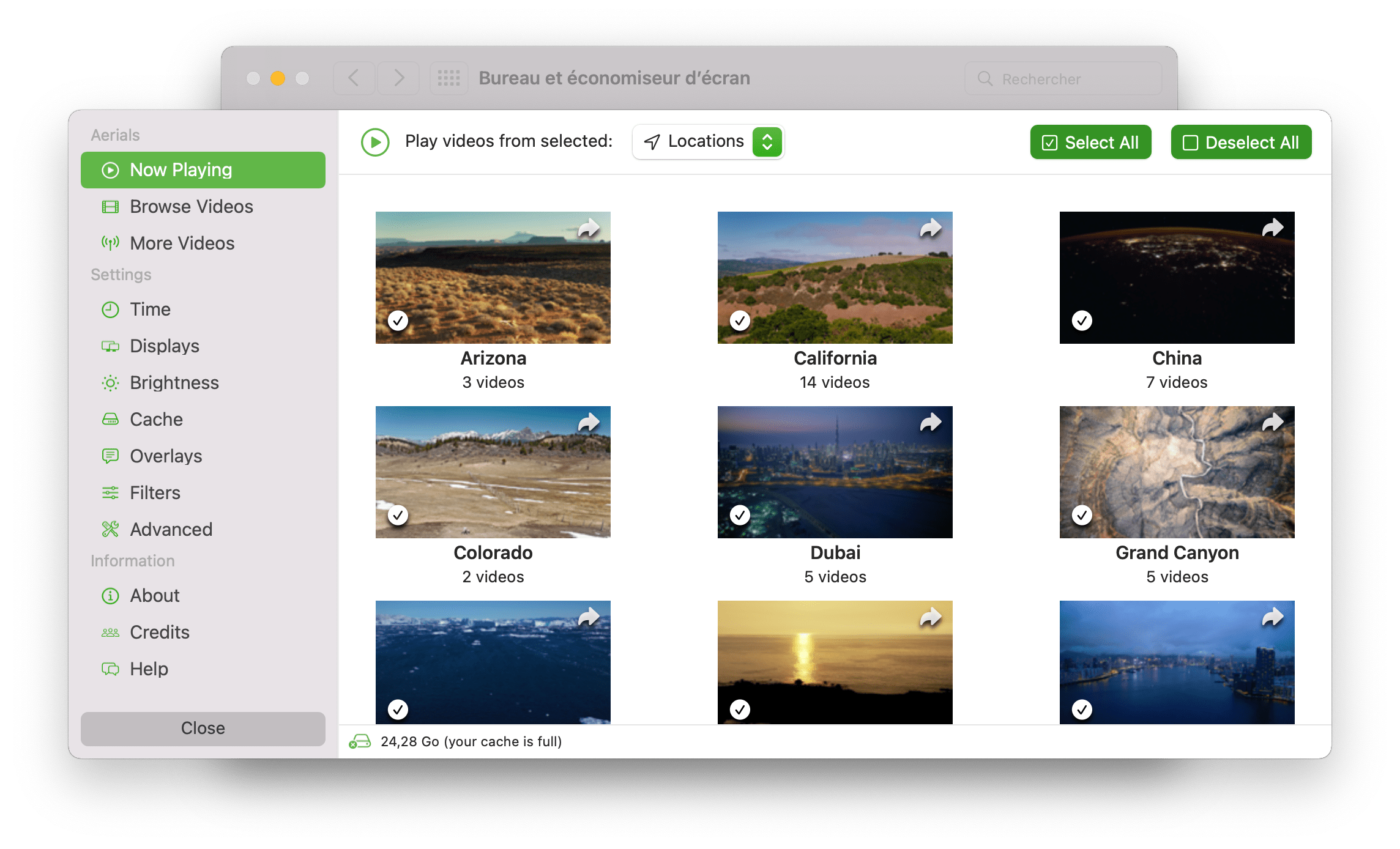 Aerial 3 refines the UI introduced previously by simplifying it. All options are directly accessible now, and more importantly, you can make multiple selections of things you want to watch. Want to see videos from Iceland and Patagonia? Two clicks will do it now! You can quickly change what you want to see and Aerial will react to it, updating your cache as needed.

Support for storing your videos pretty much anywhere

Thanks to Apple's changes to macOS Monterey, Aerial can now again let you pick where you want to store your cache folder. This includes internal drives, external drives and network shares!

And if you have multiple users on the same computer, you can finally share the same cache. Just specify the same location on each, and you are good to go! 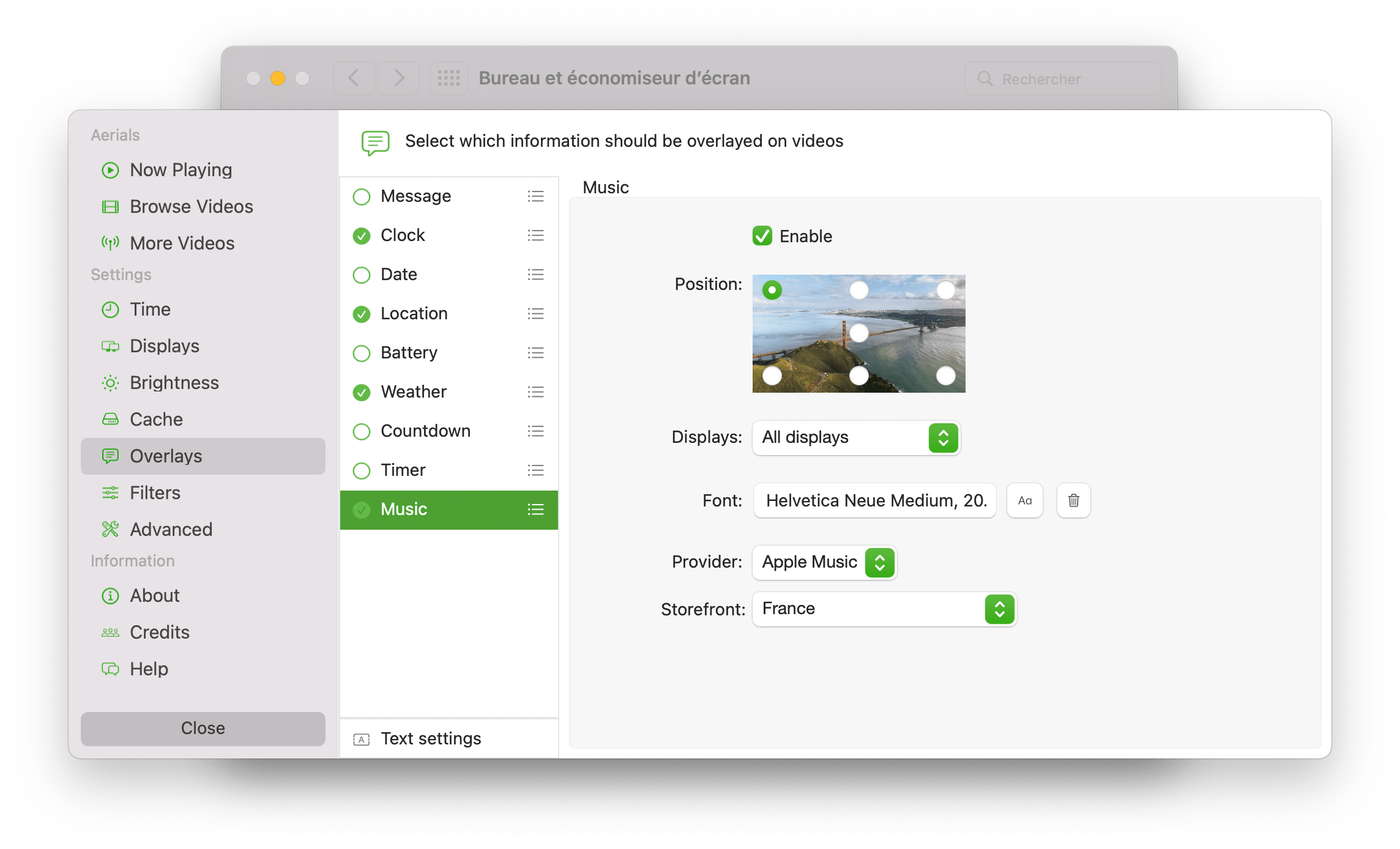 New overlays are available to be displayed, including support for both Apple Music and Spotify, to see what's currently playing in the background while your screensaver is playing! 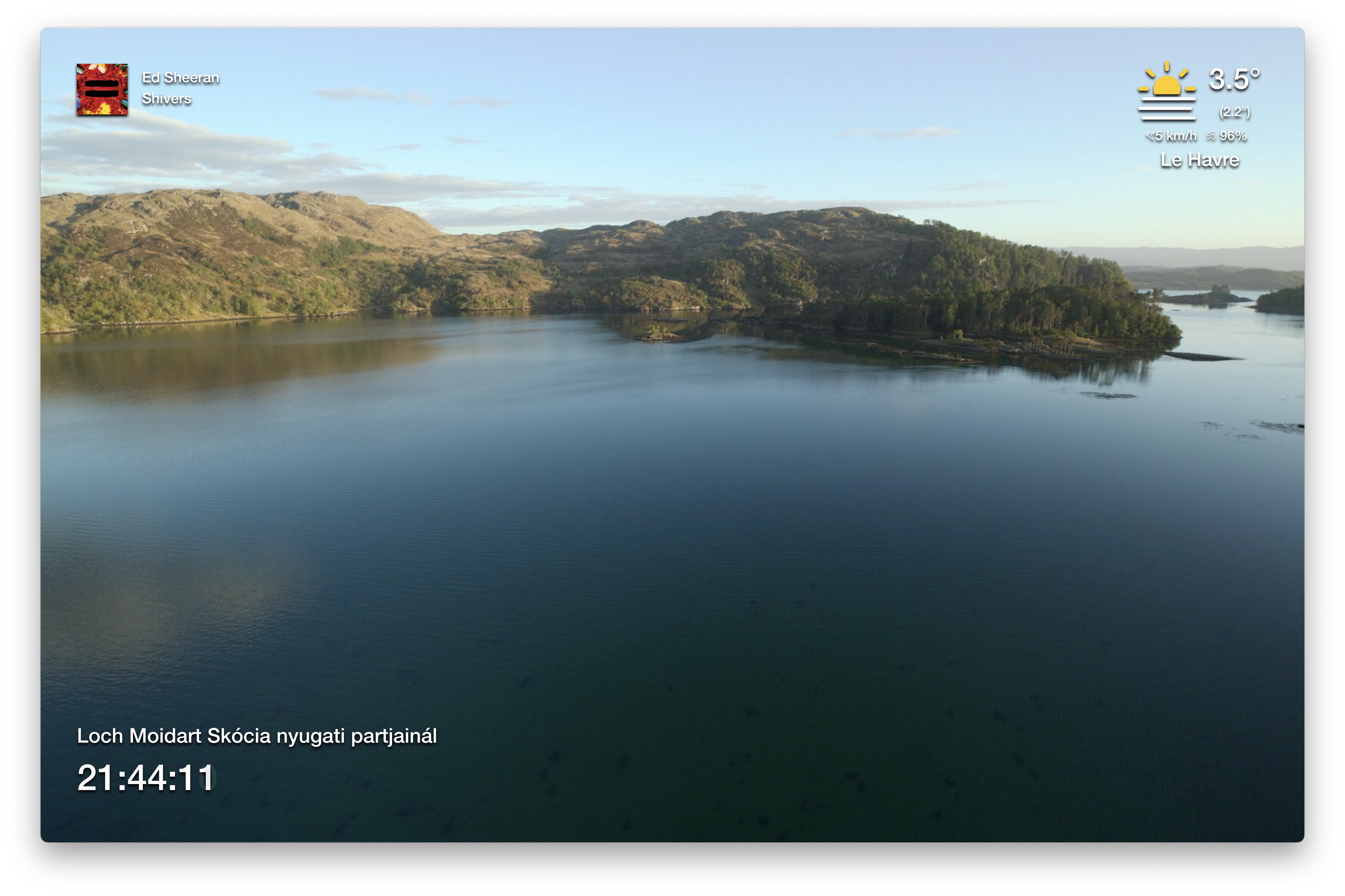 You can even see the album art!

On top of the 20 videos that Joshua Michaels & Hal Bergman gifted to Aerial, they are also releasing new video sets from Monterey, New York and the American Southwest. 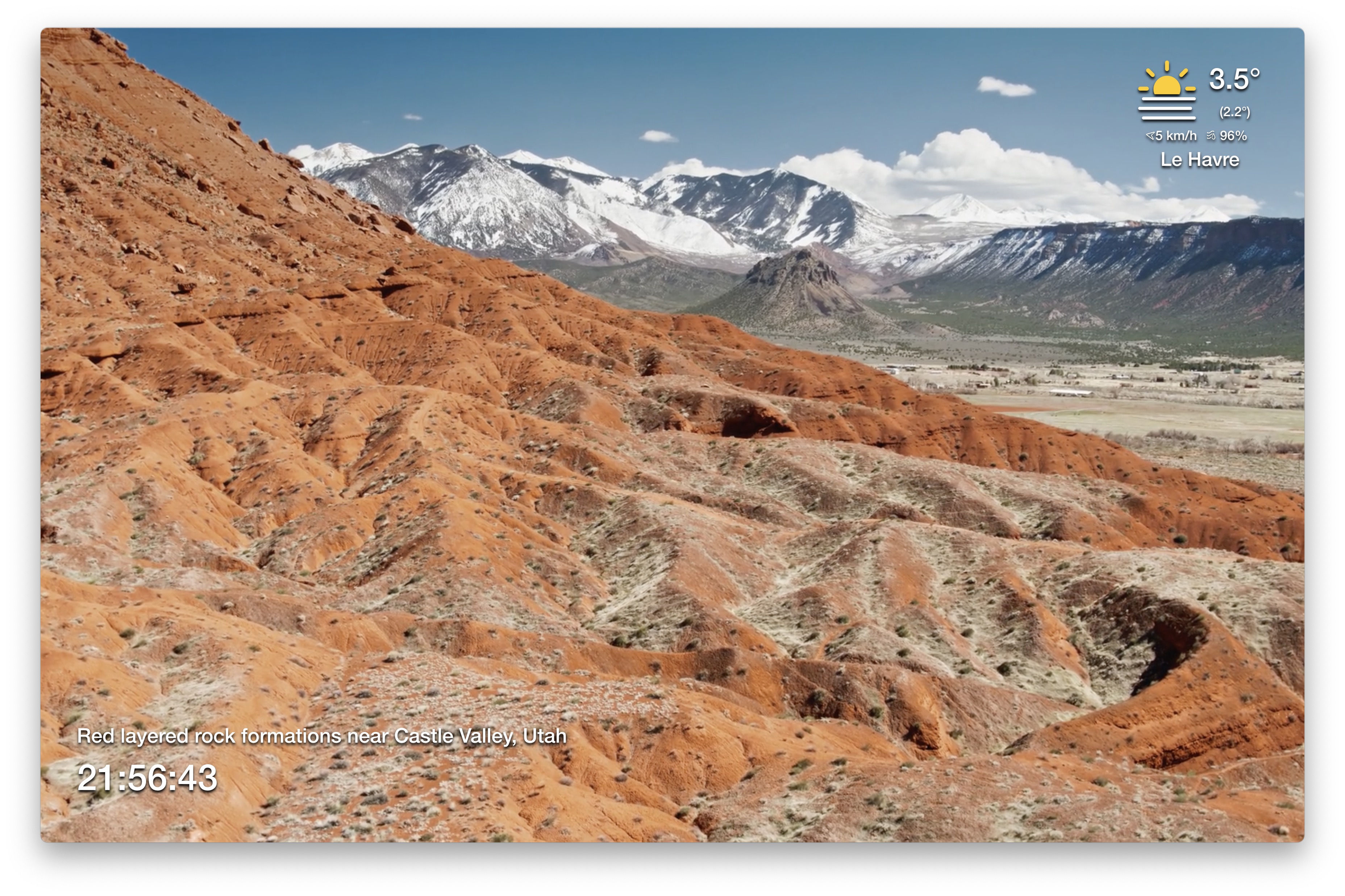 More than 4 hours of video content, all in 4K, mastered to both look great and take as little space as possible. Those videos are similarly paced to the "classic" Aerials from Apple, so they just look right at home in Aerial.


Special thanks to Josh & Hal for their support of Aerial. Please consider supporting them by checking the video packs they have created especially for Aerial on their website.

Aerial is free and open-source. It was started in 2015 by John Coates

Since version 1.4, it's maintained by Guillaume Louel.